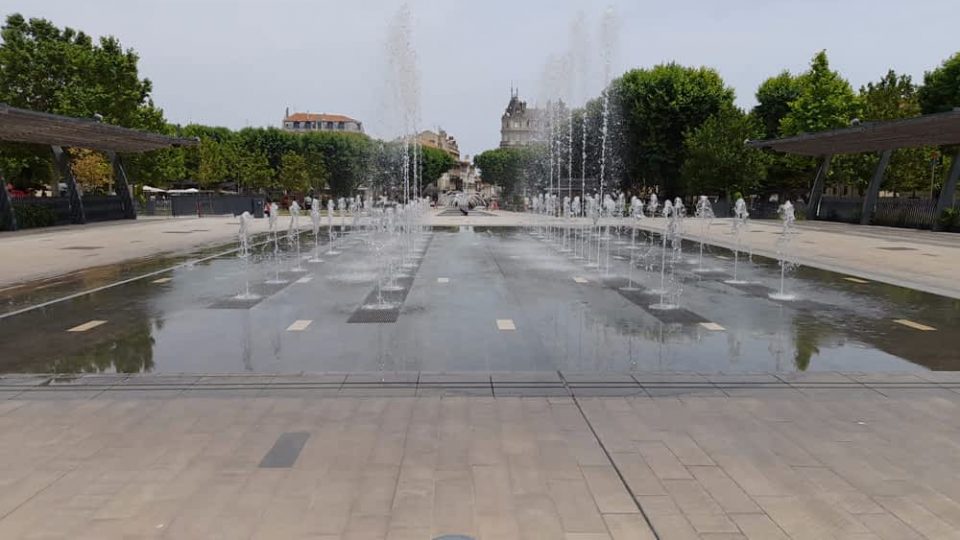 Béziers, in the Hérault, is well-located for day trips, and is a town I wanted to see in any case. I’ve booked six nights and the start has been a mix of good and bad. First shock, no elevators in the train station. I thought all major towns had been made accessible, but, no, not this one. The issue for me is to be safe on stairs carrying a heavy bag. But rare thing, there was an SNCF agent of some sort on the platform; and he carried my suitcase down and back up with the greatest good will. And then my airbnb host picked me up at the station, and besides showing me to the apartment, gave me a bit of a tour of the downtown. Very kind, very hospitable, especially considering that he has quite a number of properties to manage and is nearly always on the run.

However … the fiber optic internet service was useless to me as the router wasn’t broadcasting the network. Arrived Thursday, nothing changed today, hoping for tomorrow. Meanwhile I have access to another apartment where the wifi works. But it is not the apartment I am to live in. I suggested changing, but that didn’t fly, though it’s a much smaller one, bit cheaper, than I paid for. Both are very hot in this heat wave, each with just one small floor or tabletop oscillating fan. The apartment I’ve rented smells terrible after being closed up each time I go out, and the sofa has an unpleasant smell, noticeable only when on it. I was hoping to invite new friends to dinner one night here, but it’s not a comfortable setting. Just as well; I shouldn’t be loading up on foodstuffs when I think I will leave France within a week.

The town is also a mix of attractive and not, from the small zone I’ve seen so far. The street I’m on and the blocks nearby are a bit ratty and smelly. The sidewalks are as bad as Puerto Morelos, Mexico – and that is really bad. The old buildings have nice wrought-iron decorations, some on actual balconies, but perhaps half look in need of serious TLC.

The pedestrian area and central district have some very elegant architecture and lovely parks. I saw something I’d never heard of. A man was spraying the grass in the park, and I asked what it was he was spraying. Of course, I was disturbed by the possibility of weed killer being laid on so thoroughly. But no. “Paint,” he told me. Vegetable paint, made from algae. So here in the heat that’s how the parks look so green. Have you ever?

Today, Friday, I saw the weekly flower market, which stays open all day.

The indoor central market – Les Halles – has fewer vendors than the others I’ve seen in the region (Nîmes, Avignon, Montpellier) (in fact, a number of stalls were curtained today) but more little restaurants, which stay open beyond market hours. I’ve seen quite a few wine bars even in my limited strolls, and noted a number of tapas restaurants – unsurprising, as there’s a Spanish influence here. The border is not that far away – an hour and a half by train or car. 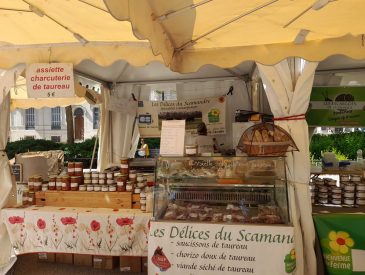 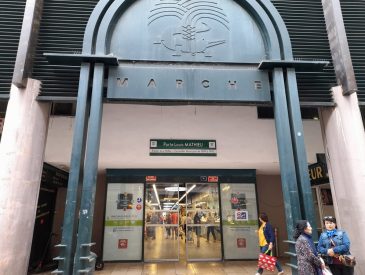 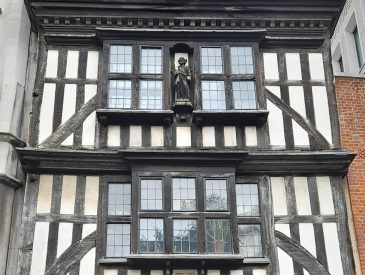